BUG File name is now synced across all devices when changed

BUG MOBILE Sometimes the app would crash on the settings page with specific settings. It shouldn't crash now!

FEATURE You can now export transactions to CSV by viewing an account and clicking "Export". If you have applied a filter, only those transactions will be exported.

FEATURE The budget table has been rewritten! The design is similar, but a lot has changed and paves the way for more improvements. I wrote a blog post going into details about it. Many interactions like the animation has changed.

FEATURE You can now add notes to categories and months

BUG This is a quick followup release that fixes QFX/OFX importing. 0.0.117 accidentally broke it, but it should work again!

In addition to the features and bugfixes below, this release introduces a new version of Actual: on the web! This is experimental, but please try this out and let me know if any problems. 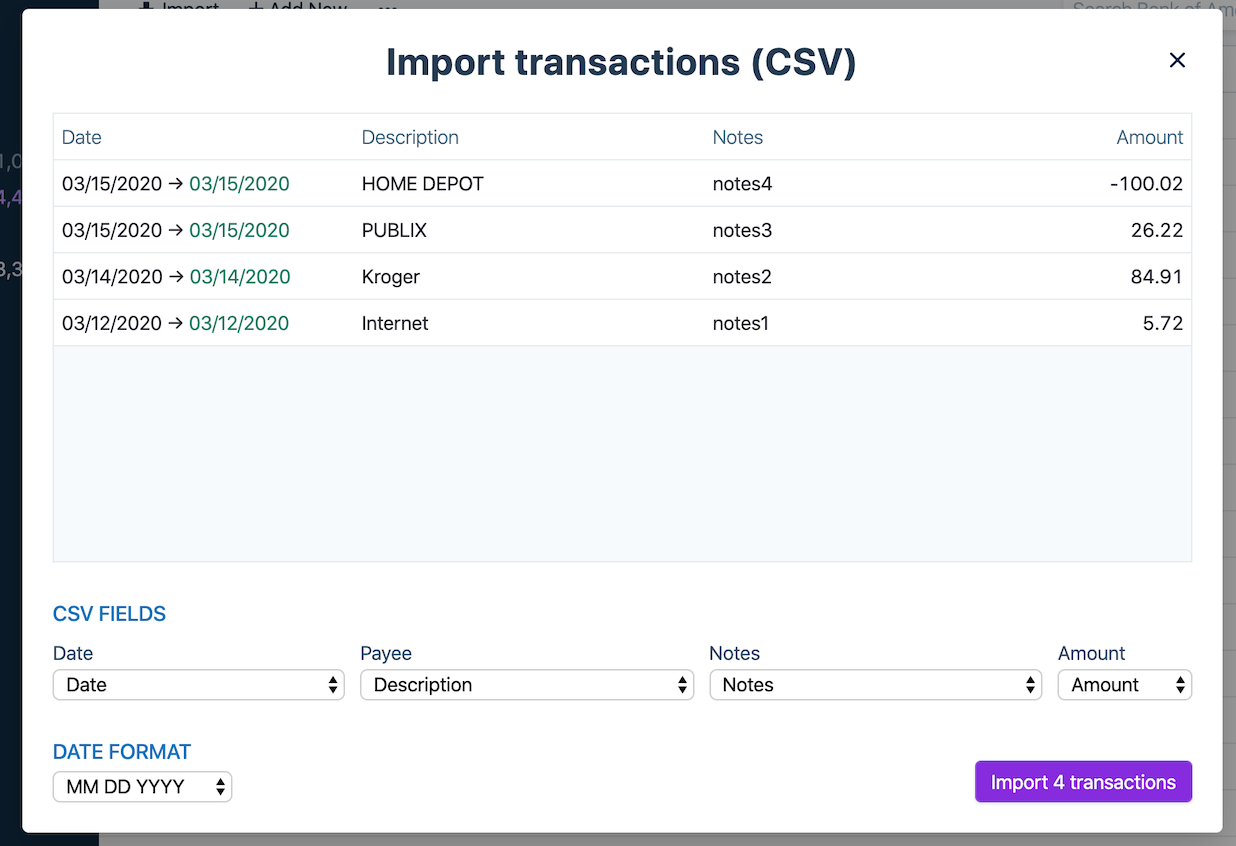 See this twitter thread for videos of all the new features and polish!

Please read the blog post for a more information about these changes. This a big update that gets ready for bank syncing and improves the experience all around. This is also the first version where a free plan is no longer available. In the desktop app, you must login to use the app. See the blog post for more details.

If you want to continue using the current version for free, stay on 0.0.112. Read the blog post for how to do that.

Moving forward, while Actual is still completely a local app and will support e2e encryption, we are starting to rely more on the cloud by default. All files default to being cloud files, which provides far better experience when setting up new devices. It also opens up the possibility of a web version of Actual, where you sign in, download your file and use it for a session in a browser (decrypting the file if needed).

This is also the first version to feature an Android app!

This is another small release only for desktop with a few fixes and tweaks. I've also updated the roadmap on trello see check it out and file any new bug/feature requests.

A quick note: have you had problems with deleting categories and transferring them to another one? I'd like to hear from you. I'm looking into a common error reported, but haven't been able to reproduce or find anyone who has that problem. What happens is you delete a category and transfer its budget over, the category gets removed but the budget doesn't update. If you restart Actual, the deleted category is back. This is because an error occurred while deleting and it wasn't actually deleted.

This is a bugfix release that focuses on improving stability. These are the most common bugs reported in our error tracking system.

Important: Fixed a critical bug from 0.0.109 which was looking in the wrong place for your files. It now looks in the correct place.

This means you will see a different list of files after updating. You should see your files before the 0.0.109 release again, but that means you won't see any files you've created since then. Luckily, with the new cloud files feature, they should be uploaded and available for download again. If you're migrating old files to the new cloud files, read the release notes: https://actualbudget.com/release-notes/

Please contact us if this causes any important data loss.

This update includes a complete rework of how syncing is set up across devices, as described in Simplifying syncing with cloud-based files. Syncing has always worked well across devices, but setting up syncing has always been a bit of a pain. It required two devices to connect directly to each other, causing all sorts of problems depending on your network conditions. Now, your files are directly uploaded to the cloud and when you log in on a device, all of your files are immediately available for download. All you have to do is select one and open it.

The documentation for setting up syncing has been updated, so you should go read it.

Up next: bank syncing, custom reports, and many other smaller features!

Existing files are not automatically converted into cloud files. You will need to set up syncing again on your devices to upgrade to the new system. Please read the docs about how to do this.

If you used a custom location for files, please read this

In version 0.0.106, we introduced the ability to customize where files are stored. You will need to set this location again. Due to a bug, in certain circumstances the feature causes users to see no files listed. In this version we reset the location preference and changed how we implemented this feature to be more robust.

You will not see your files listed if you used this feature before. All you need to do is change the location back to where they were stored before. (Unfortunately, right now this means you need to create a budget first so you can go into settings and change it)

All features and fixes

This is a small update for desktop:

This is a small followup release to 0.0.104 which caused a couple regressions. That release included a lot of changes so this release is focused stability.

First of all, I want to say sorry. There's no excuse to wait months between releases, and I'm really sorry about that. This is a big release and everything ended up being wrapped into it, but I took it slowly because making sure your data is safely upgraded and works smoothly is of utmost importance to me.

This release has a totally new budgeting backend. I'll blog about this soon, but basically the entire budget used to be implemented internally as a spreadsheet, even with it's own custom language! The original idea was to expose this to the user and allow customization of the budget formulas, but I've learned a lot since then. I still have ideas related to this, but it was silly how complex the previous implementation made everything.

It made everything in the budget slow. If you had a couple years worth of data, adding a category would lag between the time you pressed enter and it actually showed up in the budget. Same with deleting a category, or anything else.

This has been completely fixed. Now, all of the interactions with the budget are instant. The backend is insanely faster, and the frontend has been meticulously optimized to make it feel even faster.

This release also has a few other huge features, such as syncing between any devices (desktop-to-desktop), and API, and more!

Along with all these big changes, a new website has been release! This is a total redesign and reflect Actual's values a lot more accurately.

The main reason this happened is I need to write documentation for the API. One thing led to another and now there is a full documentation site about how to use Actual. This will be expanded more over time.

Big improvements in the budget UI

While the budgeting backend allows the budget to update much faster, on the frontend I optimized it even more. The whole UI is now optimistically updated, which means when you make a change it doesn't even wait for the server. It just instantly updates the UI locally.

Additionally, the hover state for budget rows was removed. This allows more specific interactions with the values themselves. When you hover over a budget amount, a faded textbox will appear making it clear that you can edit it. The values in the balance column are now more clearly clickable. This tweaks will always feel instant regardless of the number of categories. (Previously, the row hover state would lag with a huge amount of categories)

Revamp how you interact with categories

You can now edit categories and category groups by hovering and clicking the the drop down menu to reveal several actions. This will make it easier to add more actions in the future, and fixes the confusing interaction of renaming category groups.

A big thank you to Henri Maurer who has helped contribute on this release and implemented this feature!

Another major feature: Actual now has an API! Read the docs on the website.

This gives you full access to your data. The main use case is to write custom importers (if your bank gives you transactions in a specific format), but you can write anything on top of it. This is considered experimental and will stabilize over time.

Previously, only the mobile app could discover a desktop device by reading a QR code with the camera. That flow is simplified now, and Actual uses something called multicast DNS to discover devices. The desktop app puts itself into "broadcasting" mode and another desktop or mobile app will automatically discover it when setting up a new synced file.

If you want to stay with a certain version of the app for any reason, you can now disable auto-updating in the settings.

The new macOS version Catalina requires apps to be signed in another way, which is funny because the app is already properly code signed. I guess Apple really wants to control everything. Now the app is "notarized" by Apple which means they won't freak out when you try to run it.

The mobile app benefits from the new budgeting backend as well. The performance problems were even worse on mobile devices, but now loading a large budget from another device is far faster, as well as working with the budget.

To celebrate the new budgeting backend, the mobile app can now reorder categories. Move them around and even move them between groups. Just go into edit mode and drag them around. It sounds silly, but previously it was just too slow on mobile devices to do anything with categories. Now that it's all fixed, you'll be able to do everything on mobile. (deleting a category on mobile is coming soon)

Work is heavily underway for undo and an API, stay tuned!

Important note: the new payees feature requires your data format to be updated. You can only do this on desktop, and on first run you will be prompted to perform the update. After updating, syncing the mobile app will update your mobile budget (it may take a while to sync). Make sure you've downloaded the latest mobile app. Your transaction data will look wrong until you've completed this update.